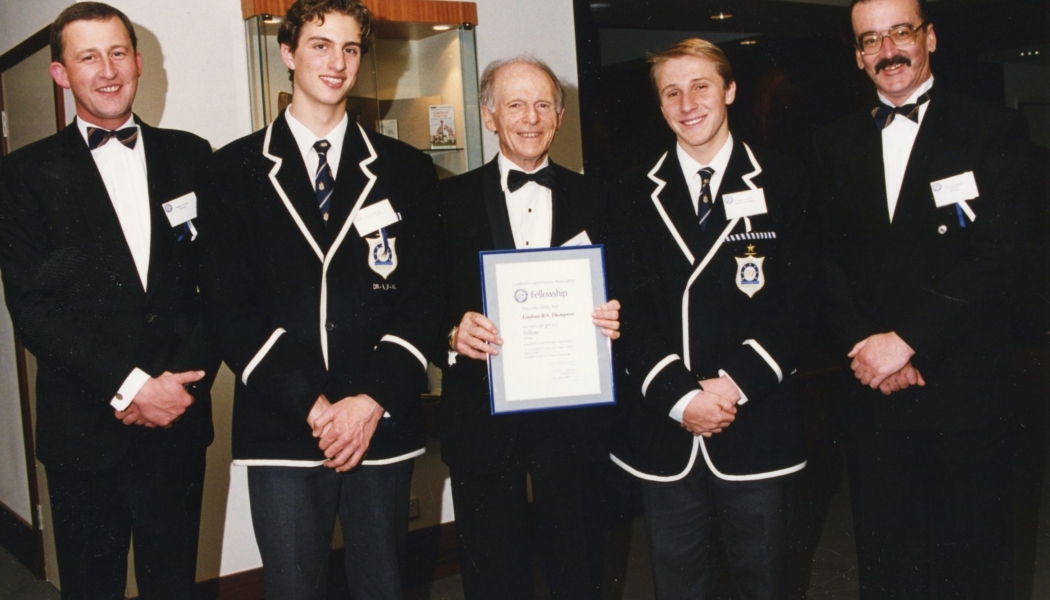 Lindsay Hamilton Simpson Thompson was born on 15th October 1923. His father, who had served in the First World War, died in 1926 and soon after Lindsay, his mother and elderly grandmother moved from Glen Iris to Elsternwick to live with his mother’s married sister (Effie Seward) and her family.

Lindsay was enrolled at Caulfield Grammar School during 1929. In his autobiography (I Remember) he recalled that on his first day he was shown around the playground by two boys who were also to make their mark in the world. One was Peter Karmel, School Captain in 1939, who later served with distinction as Chair of the Commonwealth Tertiary Education Commission and as Vice Chancellor of both Flinders University and the Australian National University. The other was Stan Kurrle, who was Headmaster of Caulfield Grammar from 1955 to 1964 and then Headmaster of The King’s School, Paramatta, from 1965 to 1982. 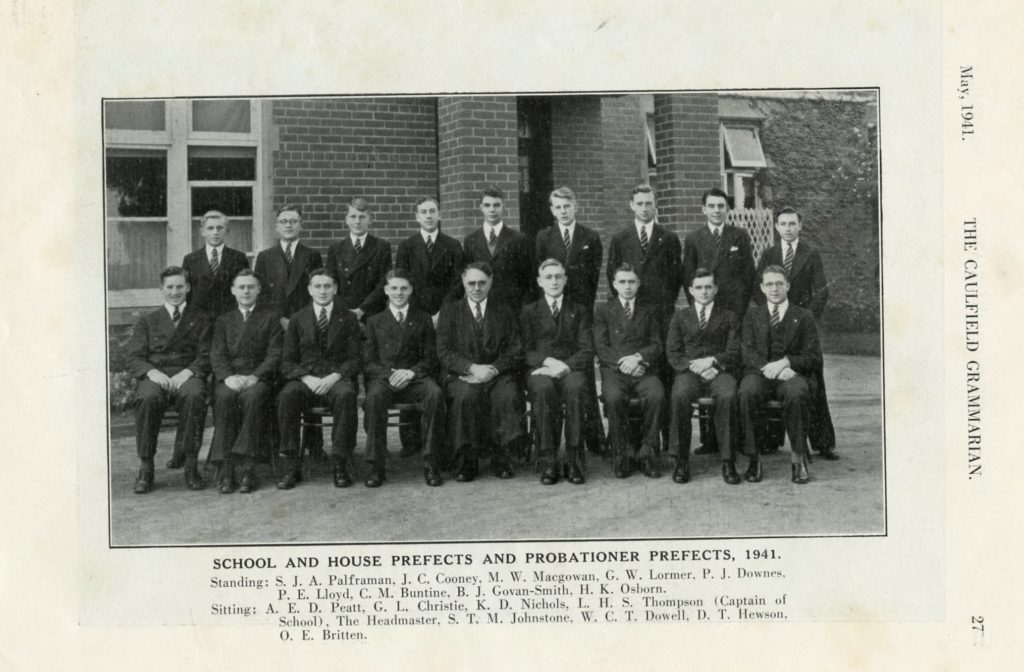 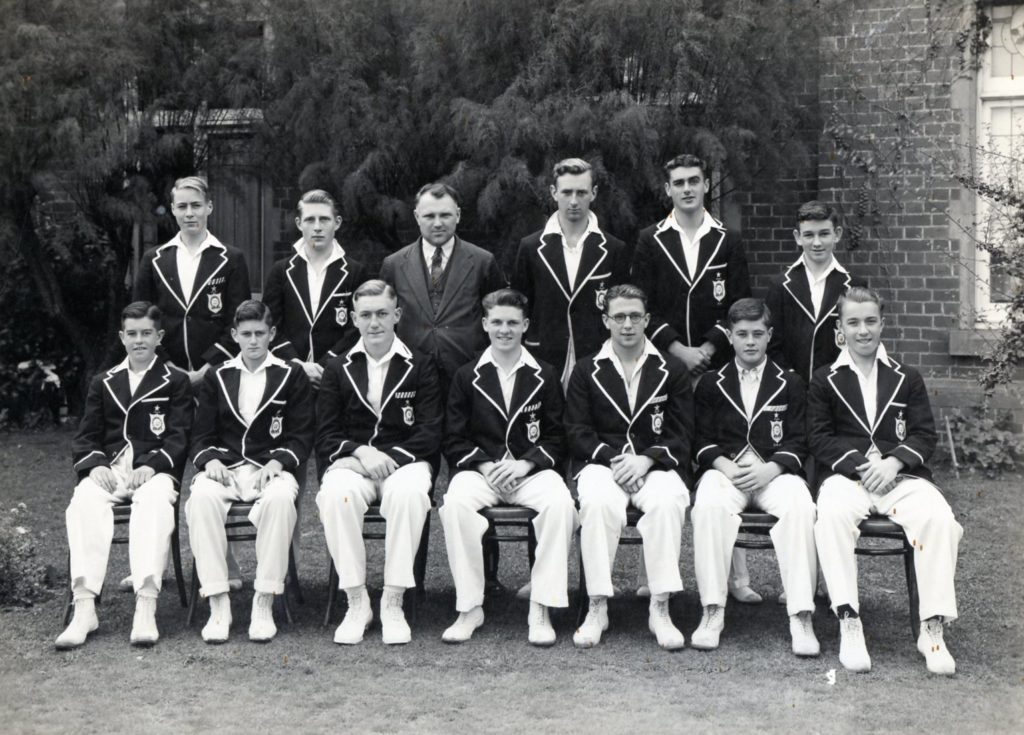 After a brief period working as a resident master at Caulfield Grammar during the early part of 1942, Lindsay joined the AIF as a signalman, training in Victoria and then serving in Queensland and New Guinea. He was discharged from the Army in October 1945 and gained his first experience of political campaigning when he assisted the Liberal candidate for Hawthorn (Fred Edmunds) during the lead-up to the 1945 state election.

Lindsay began studying for an Arts degree at the University of Melbourne in 1946 but had to abandon the year due to ill health. This was due to recurring malaria, which he had contracted during service in New Guinea. He resumed studies in 1947, completing a Bachelor of Arts degree in 1949 and a Diploma of Education in 1950. He was elected to the University’s Student Representative Council and involved in student politics.

Lindsay commenced teaching at the Malvern Central School in 1951 and transferred to Melbourne High School in 1953. He had married Joan Poydner in January 1950. During 1954 he became seriously ill and endured five operations before he was able to regain reasonable health. Meanwhile, he had begun seeking pre-selection for the Liberal Party to stand for a seat in the Victorian Parliament. He eventually gained pre-selection for the Upper House seat of Higginbotham and was elected to Parliament in 1955.

Lindsay was member for Higginbotham (later called Monash) from 1955 to 1970, then transferred to the Lower House seat of Malvern, where he served from 1970 to 1982. In 1958, he was appointed Assistant Chief Secretary and Assistant to the Attorney General in the government of Henry Bolte, positions he held until 1961. He served as a minister without interruption until 1982, making him the longest serving minister in Victorian history. Lindsay was  Minister for Housing and Forests from 1961 to 1967 and Minister for Aboriginal Welfare from 1965 to 1967. His two primary areas of focus as Housing Minister were facilitating home ownership for Victorians and eradicating the slums and appalling housing conditions that existed in a number of Melbourne’s inner-city suburbs. This resulted in many of Melbourne’s controversial public housing towers being built. He believed that there was no question that they provided far superior and healthier accommodation to the tumble-down shanties and galvanised iron sheds of the slums.

He was appointed Minister for Education in 1967 and held that post for a record 12 years until 1979, presiding over a major expansion of state education in Victoria. This was the most difficult and challenging portfolio at the time, owing to the massive increase in demand for teaching services due to baby boomers moving through the school system. It was also a period of significant militancy amongst teacher unions that had not previously been experienced.

Education was a major passion for Lindsay Thompson from the time he first entered Parliament. He believed that a solid education allowed young people to develop their spiritual, mental, physical and creative powers, thereby equipping them for life. His achievements in the portfolio were many, including finding solutions to deal with teacher shortages; significantly reducing the teacher pupil ration; and decentralising the Education Department into regional areas, which he believed had a better knowledge of local conditions and could make decisions more appropriate for those conditions.

He published a book, Looking Ahead in Education, in 1969, launched by Sir Robert Menzies. In it he made 65 recommendations on changes to the Education system. By the 1990s most of these recommendations had been implemented. 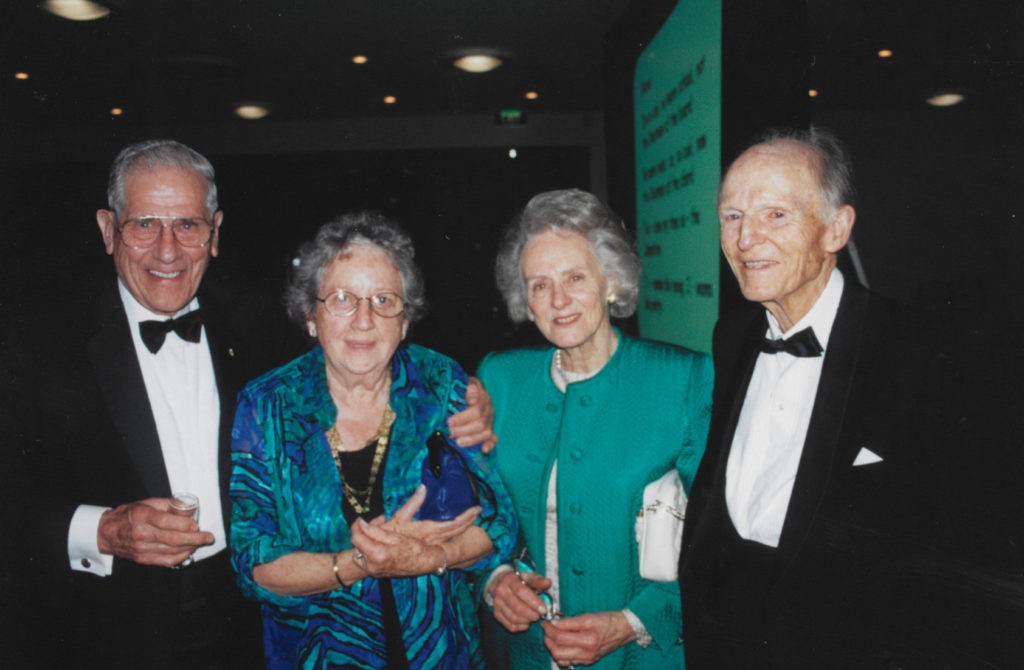 In 1972, a teacher and six children were kidnapped at a school in the country town of Faraday by two men demanding a $1 million ransom, stating that Lindsay must deliver the money outside the Woodend Post Office at 5.00am the following morning. Lindsay duly travelled to  the Woodend Post Office  to deliver the ransom personally. A man did walk along the street past the Post Office. Whilst it was thought he was connected with the kidnappers, this could not be proved until many years later. The kidnappers failed to appear, presumably over concerns their safety may be in jeopardy if they did. The teacher and children subsequently escaped, with the teacher and older children kicking the lock open in the back of a panel van in which they were being held. Lindsay received a Bronze Medal for Bravery from the Royal Humane Society for his actions.

Following the escape of one of the Faraday kidnappers some years later from Pentridge Prison, he again (in 1977) had to deal with the kidnapping of school children and their teacher from a country school, this time at Wooreen. At this time, he informed police that he was prepared to exchange himself for the hostages, should that be possible. This offer was never acted on, as one of the hostages was able to boldly escape during the night and alert police.

During Rupert (‘Dick’) Hamer’s term as Victorian Premier, Lindsay was elected Deputy Premier and served in that position for nine years. He was also Minister for Police and Emergency Services from 1979 to 1981 and Treasurer from 1979 to 1982. When, in June 1981, Hamer decided to resign as Premier amid unrest within the parliamentary party, Lindsay was elected to take his place. The Liberals had been in power for 27 years and the Labor Opposition, under John Cain, were mounting a strong challenge for government. Lindsay served as Premier for nine months before the election in April 1982. The Liberals were defeated and Lindsay resigned as Liberal Leader and from Parliament in the following October.

Lindsay Thompson AO CMG died on 16th July 2008. Speakers at his funeral included former Australian Prime Minister, John Howard, former Federal Treasurer, Peter Costello and former Victorian Premier, Jeff Kennett. The order of service for his state funeral, held at St Paul’s Cathedral, included a long list of organisations he had been associated with during his life-time. He had a long association with the Melbourne Cricket Ground, being a member of the MCG Trust for 32 years and its Chair from 1987 to 1998. He was also an ardent supporter of the Richmond Football Club. He was its number one ticket holder for many years and was awarded life membership in 1993. At the time of his death, one newspaper editorial commented that he served Victoria with rare decency, dedication and distinction.

After leaving school Lindsay Thompson was a great supporter of, and regular visitor to, Caulfield Grammar. His sons – Murray and David – both attended Caulfield as did six of his grandchildren. When Caulfield’s new physical education and sports centre was opened in 1997 it was named in his honour.