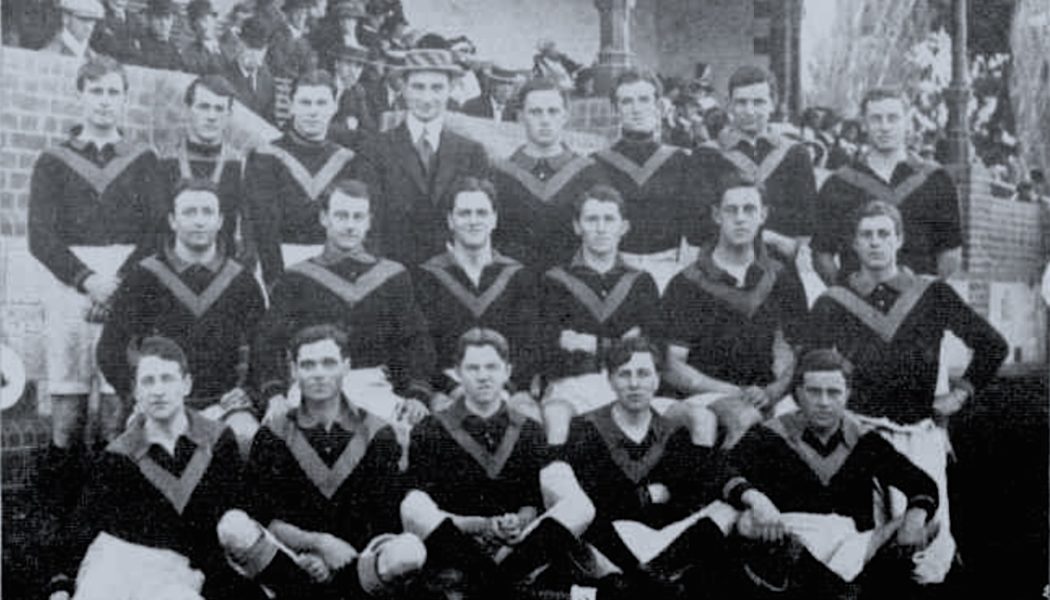 John Ware Robinson attended Caulfield Grammar School from 1902 to 1911. Known to his family as “Jack”, Robinson was born in St Kilda on 28th December 1891, the son of the Rev. Samuel Robinson and Annie Robinson (née Ware).

Robinson pass the Junior Public Examination (equivalent to the matriculation) in 1909 but remained at Caulfield for two more years before entering the University of Melbourne. He was a prefect in 1910 and Captain of the School in 1911. He studied for a Bachelor of Arts degree at university but his studies were interrupted by war and he eventually graduated with a BA (in absentia) in 1921.

Robinson was a talented sportsman who represented Caulfield in football, cricket and athletics. He was captain of both the first football and cricket teams in 1910 and 1911, and won two events (the open hurdles and high jump) at the 1910 Schools’ Championships of Victoria meeting, conducted by the Victorian Amateur Athletics Association (VAAA).

In 1911 Caulfield became a foundation member of the Schools’ Amateur Athletics Association of Victoria (SAAAV), a group of private and small church schools dedicated to maintaining the “amateur ideal” in school sport. Robinson was captain of Caulfield’s football team that won the inaugural SAAAV premiership and also a member of the athletics team that won the premiership.

In addition to playing inter-varsity football for the University of Melbourne, and for University in the Metropolitan Amateur Football Association, Robinson played one game for the University side in the Victorian Football League (VFL) (University was a VFL member from 1908 to 1914). This match was against St Kilda at the MCG on 18 May, 1912. A ruckman in his school football days, Jack Robinson was mentioned as having played some “clever” football up forward for University in his one VFL game. His army records indicate that he stood 5 foot 11 inches (180cm) tall and weighed 12 stone (76 kg).

Robinson enlisted in the First AIF in October 1914. He served at Gallipoli and in the Middle East, first in the Australian Camel Field Ambulance and, later, in the 3rd Light Horse Field Ambulance. He sustained a gunshot wound in action in 1915 but soon returned to active service. He achieved the rank of sergeant, was mentioned in dispatches and awarded the Distinguished Conduct Medal (DCM). The citation for the DCM read as follows:

For gallantry and marked devotion to duty during and after the battle of Magdhaba on 23rd December, 1916. He was conspicuous in his efforts at the successful collection of wounded during and after the battle. But for his untiring and successful efforts many wounded would have undoubtedly been left out overnight. Also at the battle of Rafa on 9th January, 1917, this non-commissioned officer displayed great devotion to duty and rendered splendid service in the collection of wounded under fire. Both in the Field and in Camp he has displayed marked ability as Transport Serjeant.

Jack Robinson returned to Australia in 1919. While at university he had been one of the secretaries of the Australian Christian Movement and, in 1922, it was reported that he was its “travelling secretary”. He later spent at least 20 years as a sheep grazier on a property called Nar-Darak, near Molesworth in Victoria.

The July 1920 edition of the school magazine reported that the decision to enter a team had been made at a meeting in March.  Its report continued:

Early in the season it was feared that there would be a difficulty in getting together a team fit to compete in Metropolitan football.  However, old school players gradually rallied round, until at the present time we have the following formidable list from which to choose the eighteen. …

At the head of the list of 26 players was “J W Robinson” and it was further reported that: “John Robinson was elected captain and Len Harbord vice-captain, so the team is lacking nothing in the way of leadership”.

Robinson only captained the club in its first year and 1920 was probably his only season that he played.

Jack Robinson married Jean Hutchinson on 25th July 1923. They had one daughter (Judith). He died at Dormana on the 25th February 1966.