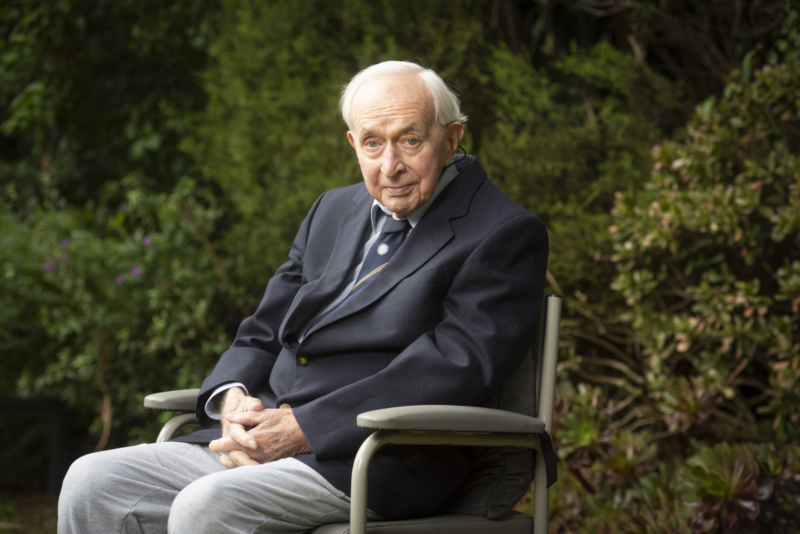 Walter Dowell commenced at Caulfield Grammar School in 1936 and completed a post-matriculation year in 1941. A member of Buntine House, he participated in both house and inter-school sport, and had roles in a number of school theatre productions.  In his final year he was a Prefect (with responsibility for the student newspaper – News and Views).

After leaving school, Walter studied science at the University of Melbourne, completing a Bachelor of Science degree with a major in physics in 1944. While at university he maintained his interest in theatre and sport, being involved in university theatre productions and both the Caulfield Grammarians’ Football Club and the Grammarians theatre group (the Caulfield Players).

He joined the RAAF in 1945 and spent two years based in Melbourne, being stationed for a time at the MCG and later Point Cook. He then returned to the University of Melbourne to complete at Master of Science degree in physics. 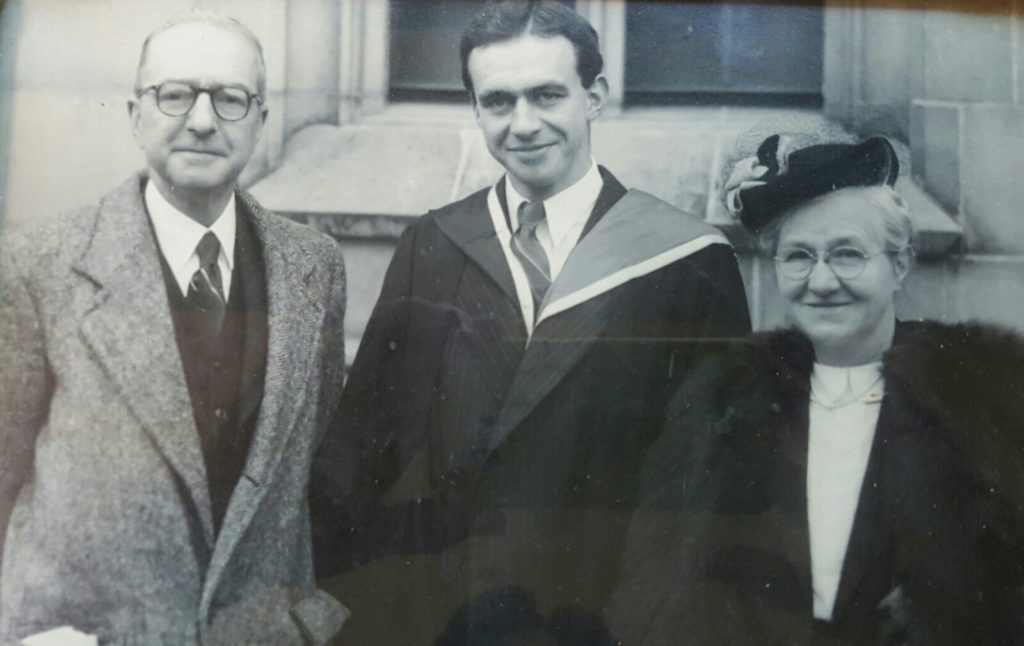 Walter Dowell with his parents at his Melbourne University graduation

Physics and the Electron Microscope

During the early 1950s Walter was employed as a physicist in the Division of Chemical Physics at the Commonwealth Scientific and Research Organisation (CSIRO) at Fisherman’s Bend in Melbourne, mainly working on the development of the electron microscope.

His research work led to him receiving a four-year scholarship from Professor Ernst Ruska and the CSIRO to study at the Max Plank Gesellschaft in the Fritz Faber Institute in Berlin. Professor Ruska had developed the first electron microscope in the 1930s and was awarded the Nobel Prize for Physics in 1986 for his many achievements in electron optics.

Walter travelled to Europe to take up his scholarship in 1958, the journey taking four weeks on a Norwegian cargo ship called The Tagus. He began work on the electron microscope in in 1959 and later that year presented a paper – “Developmental Electron Microscopy” – at a scientific conference in Berlin. This was one of many scientific papers that he presented at conferences throughout the world during his professional life. Walter maintains a strong belief to this day in the importance of scientists publishing their research and sharing their work with colleagues. 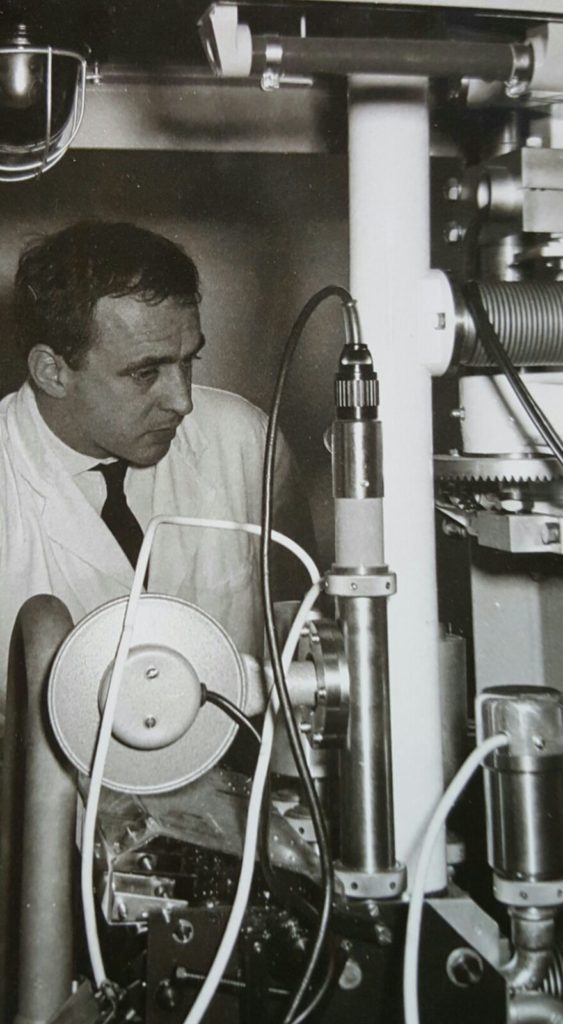 Walter Dowell with the electron microscope in Berlin

Walter received his doctorate in 1963 from The Freie Universitat of Berlin. This was a Doctor rerum naturalium (Dr rer nat), literally a “Doctor of things of nature or doctor of natural sciences”. It is a post-graduate degree awarded by universities in some European countries (e.g. Germany and Austria) to graduates in natural science, mathematics and similar areas. It is equivalent to a PhD.  One of his many achievements at the time was that he held for a two-year period the ability to achieve the best resolution by an electron microscope.

Walter met Lieselotte (Lilo) in 1960 and they were married in 1963, Walter acquiring two children, Val and Torsten, and a shiny, modern Volkswagen car, in the process. With his scholarship completed, Walter and his new family returned to Australia in 1963 and to work at the CSIRO’s Division of Chemical Physics. This was still based at Fisherman’s Bend but moved to Clayton (near Monash University) in 1965. 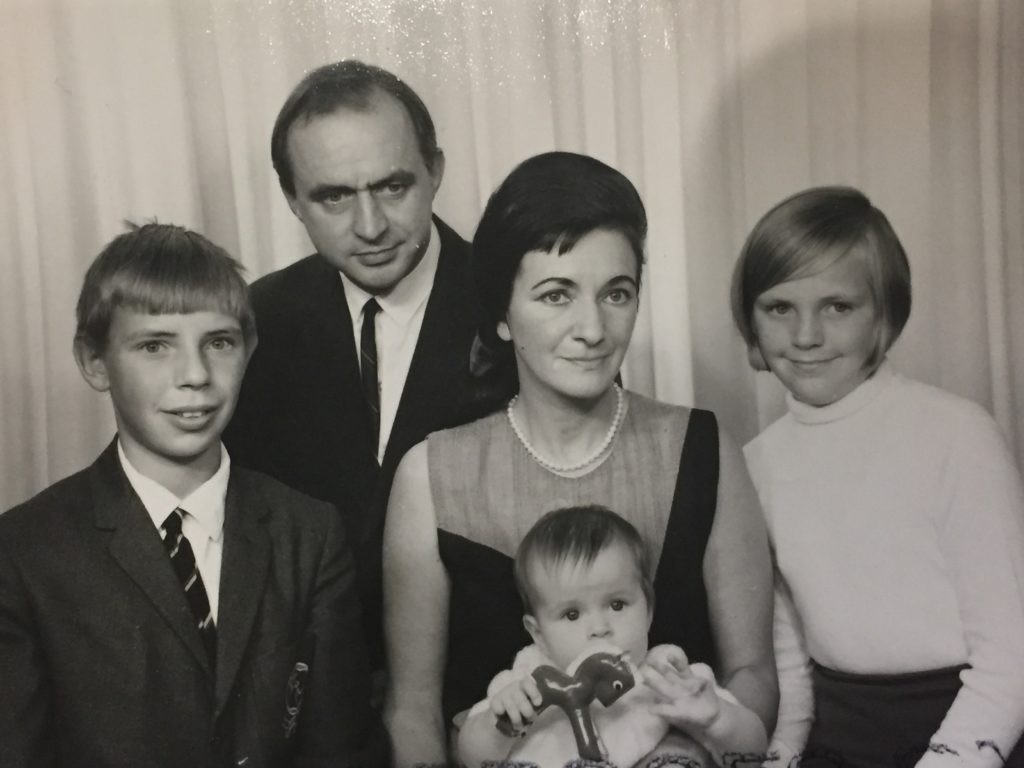 Walter Dowell with his family in 1968

Walter and Lilo’s daughter Nina was born in 1967 and the following year Walter and family embarked on a nine-month journey to Europe and Japan. This was mainly for work but the family also enjoyed some holiday time together. Walter presented research papers at conferences and was a visiting guest scientist at a number of institutions, including the Fritz Haber Institut, Siemens and AEI in England, Graz in Austria, Sony and Hitachi in Japan, and the physics institute in Halle, (East) Germany.

In addition to undertaking numerous overseas trips to present at conferences during his career, Walter hosted many foreign scientists at the CSIRO, including providing accommodation for many of them in the family home. He retired as research scientist in 1985 at the age of 59 to spend more time with his wife, in his veggie garden, on holidays at Anglesea and to indulge his interest in fine wines. His love of fine wines and good food led him to becoming Master of the Melbourne Cricket Club’s Long Room Food and Wine Society. 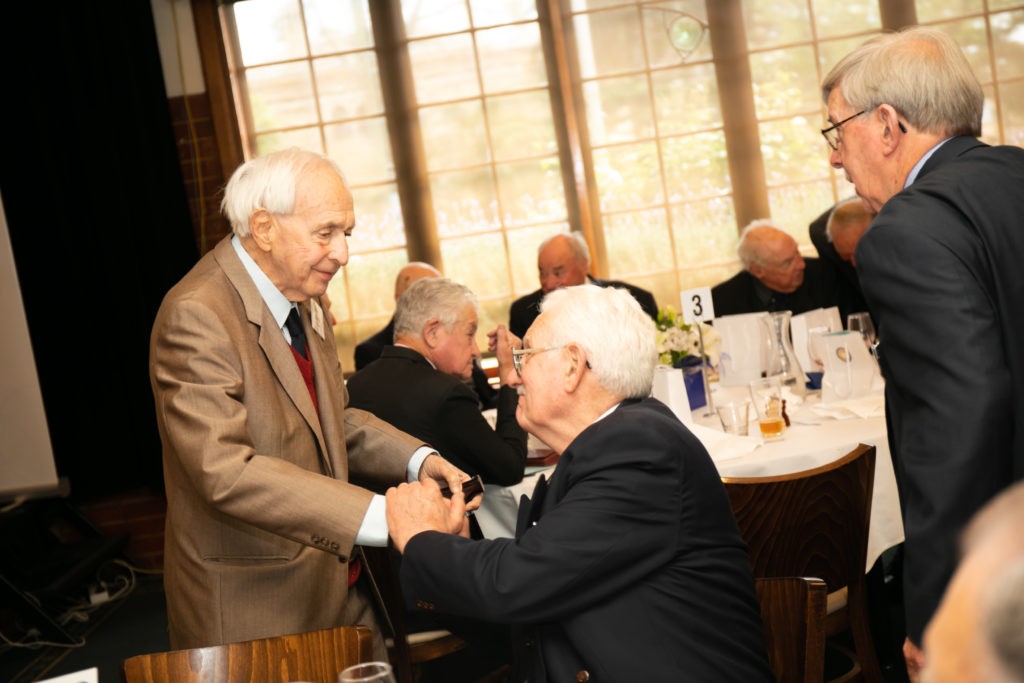 When Caulfield Grammarians’ Association (CGA) established its Archer Chapter in 1992 for past students who had attended the School during the headmastership of Mr Frank Archer (1931 to 1954), Walter became its first President, a position he still holds. He embraced the role with great enthusiasm and was pivotal in the developing the Chapter as an important group within the CGA. Until age caused him to slow down a little, he eagerly assisted with the organisation of Chapter luncheons with the help of the CGA Office and fellow Chapter members who joined him on the Archer Chapter Organising Committee. He also wrote reports for Labora and maintained a strong interest in the activities of both the School and the CGA. He developed a close friendship with Stephen Newton, Caulfield’s Principal from 1993 to 2011, and was a regular attendee at school events with wife Lilo. He also maintained close friendships with classmates from school, including George Christie, Max Jordan, Orville Britten, Murray Johnson and Gordon Spence (some of whom have now passed away). 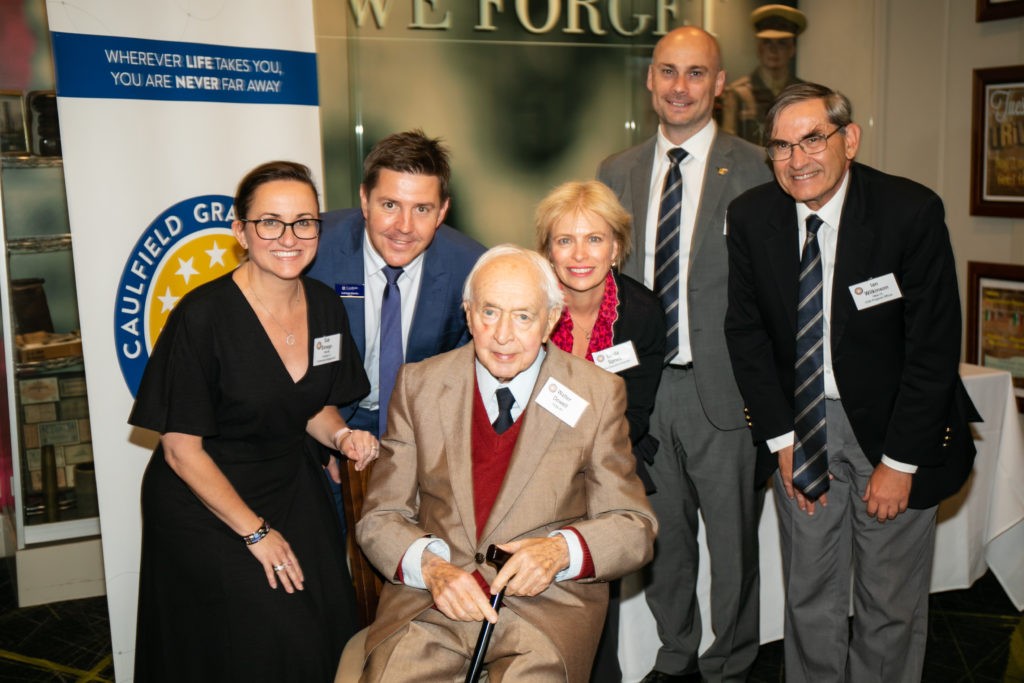 Walter was awarded a CGA Fellowship in 2004 for his service to the Association.

Walter’s brother Roger attended Caulfield from 1929 to 1933. His daughter Val has been employed at Caulfield Campus since 2005 as a nurse and coordinator of the Health Centre. Val is a member of the Caulfield Grammarians’ Rowing Club, where she is a Committee member and has enjoyed considerable success in Masters’ events. Val’s children, Olivia and Nick (Brewer), attended Caulfield Campus. Nina’s sons Dane (Year 8) and Oscar (Year 7) Gray are currently students at the same campus.

Sadly, after writing this article, Walter passed away on 10 June 2021.