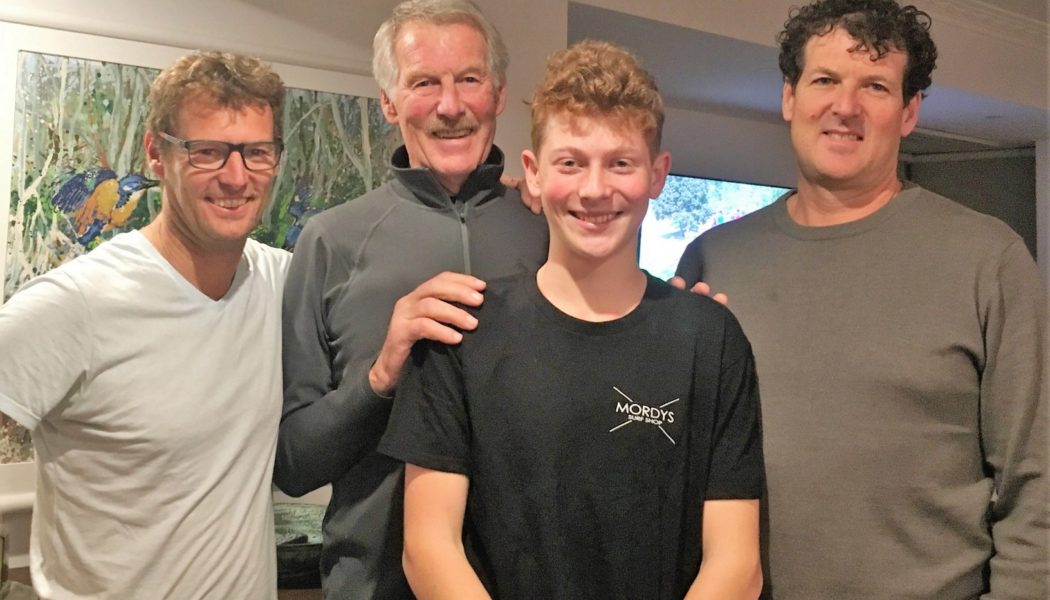 Quite a few families have had two, three or more members at Caulfield Grammar School; but seven is a rarity. One of those is the Vorrath family whose first members arrived in the 1920s.

Aside from being a good student, Carl Vorrath (1928) was a fine tennis player. After leaving school he studied automotive engineering, becoming a leading metallurgist with expertise in the development of aluminium. In 1956, he founded his own aluminium casting firm and was a part-time lecturer in metallurgy at the Royal Melbourne Institute of Technology. Carl supported the school for the rest of his life, becoming an early member of the Foundation and attending many reunions.

Travis Vorrath (known as Bill) (1929) and was one of those boys who excelled at everything. By the time he left school, he had appeared in two school plays, was a member of the swimming team, captain of the 1929 premiership first eighteen, captain of Lyle Buntine House and School Captain. To add to that list, he was Dux of School, gaining honours in Chemistry, Physics and French. He studied medicine at the University of Melbourne where he also rowed in the university’s interstate crews in 1932 and 1933. He went on to practise as an obstetrician and gynaecologist for more than 50 years.

Val Vorrath (1930) received a number of awards for academic excellence. Like Carl, he was a good tennis player and featured in many of house teams. After leaving school, he was the third generation of his family to work in W. Vorrath and Sons, Fine Upholsterers.

Carl’s son, Graeme (1955-61), like the previous generations, was a gifted sportsman and an excellent student. He was a member of the school’s swimming team for five years, was a higher jumper in the athletics team and played football in the first eighteen. He was the first Caulfield Grammar footballer to be selected in a combined APS team to play against a team from the AGSV. He received School Colours for both swimming and football.

After leaving school, Graeme played for the Caulfield Grammarians’ A-grade amateur football team and was selected for both the Victorian and Australian amateur teams. He completed a Bachelor of Economics degree at Monash University, an MBA at the University of Utah and studied international marketing at Harvard University. While at Monash, he also managed to play football for VFL club St Kilda.

Graeme and his wife, Carol, travelled to Europe soon after they were married to sail in the World Championships in Sweden. It was a trip that eventually lasted eight years and saw them come home with three children. Their life in Germany created the opportunity to commence a new business in Australia with plastics factories in Melbourne, Sydney and Brisbane. Selling out in 1990, Graeme became managing director of the family aluminium casting firm.

Graeme’s two sons, Cameron (1987) and Kester (1991), also attended the school. Cameron featured in the swimming, rowing, tennis and football teams. As part of the Red Cross Appeal in 1987, he competed in the Murray Marathon, winning his division. Enrolling at RMIT University in 1988, he completed a Bachelor of Commerce degree and, later, an MBA at the University of Melbourne.  Growing up a stone’s throw from Port Phillip Bay, Cameron developed an interest in sailing and competed in State and Australian title regattas. After an extended time in corporate life as both consultant and manager, Cameron chose to join Graeme in the family business. He now runs Alliance Connect, a multi-facet non-ferrous casting and engineering facility based in Carrum Downs and was instrumental in the recent acquisition of the company’s main competitor.

Kester won a string of prizes for academic excellence, for sport and for service while at school. He was deputy vice-captain of swimming, captain of the second eighteen and vice-captain of Barnett House. He was a Yarra Junction leader and was School Captain in 1991. He also edited Lion’s Den, the Barnett House magazine. In 1992, he enrolled at Swinburne University where he completed a Bachelor of Engineering degree which included an industry year in the town in Germany where he was born. An MBA at the University of Melbourne followed. Kester chose not to pursue an engineering career and switched to finance, becoming a sixth sigma black belt and a consultant to the larger banking institutions. Catching the travel bug, he spent 12 months in South America and later went to Germany, where he re-met his sweetheart from university days and they married with 40 Australians making the trip for the wedding. Now resident in Melbourne with three children, he has made another change and entered the building industry.

Cameron’s son, Owen, entered Year 7 at Caulfield in 2014 and, like his ancestors, has had a significant involvement in sport, playing first volleyball and first eleven hockey. His role as Zazu in Lion King Jr was unforgettable and his theatre involvement continues. He has also been a Yarra Junction leader and has taken an interest in mooting, participating in competitions in both 2018 and 2019.  Owen is currently a member of the School Committee and Theatre Co-Captain at Caulfield Campus.