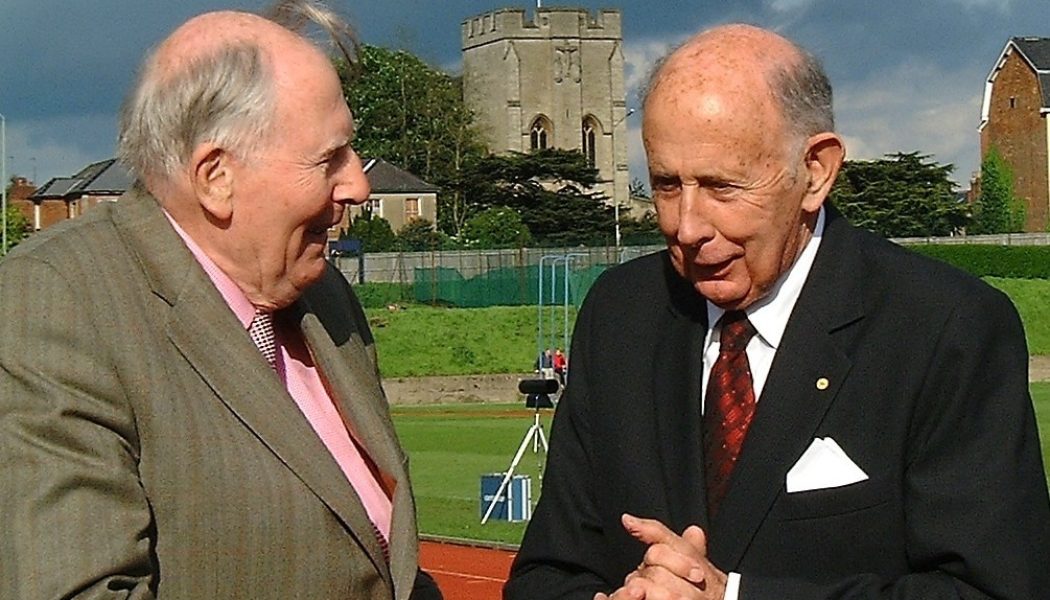 Today (6 May) marks the 66th anniversary of what many consider to be the greatest day in athletics history. On 6 May 1954, running at the Ifley Road track in Oxford, Roger Bannister, paced by his friends Chris Chataway and Chris Brasher, became the first man to run the mile in under four minutes. His time was 3.59.4. Forty-six days later, running at an international meeting in Turku, Finland, the Australian John Landy (Class of 1948) broke Bannister’s record with a time of 3.57.9. This remained the world record until July 1957.

Landy and Bannister met later in 1954 at the British Empire Games in Vancouver, Canada, in what was dubbed “The Mile of the Century”. In this race both broke four minutes for the mile – Bannister winning after trailing for most of the race. Bannister retired from athletics at the end of 1954 but Landy made a comeback in 1956 and was placed third in the 1500 metres at the Melbourne Olympics.

John Landy competed his schooling at Geelong Grammar School but his primary and junior secondary years were spent at Malvern Grammar School, which was close to his family’s home. John was a member of Malvern’s athletics teams in 1943 and 1944. After leaving school, he gained a Bachelor of Agricultural Science from the University of Melbourne and taught biology at Geelong Grammar’s ‘Timbertop” was a few years. He later joined ICI where he became a senior manager. He has written two books on natural history and served on the Victorian Land Conservation Council for eight years.

On 1 January 2001 he was appointed Governor of Victoria replacing Sir James Gobbo. John Landy retired as Governor in April 2006. He is a member of the Sport Australia Hall of Fame and has received many honours, including an MBE (Member of the Order of the British Empire) in 1955 and an AC (Companion of the Order of Australia) in 2001. In 2006 he was appointed a Commander of the Royal Victorian Order (CVO) during the Queen’s visit to Australia. John now lives in retirement in country Victoria.

Photo by GooglerW on Wikimedia Commons