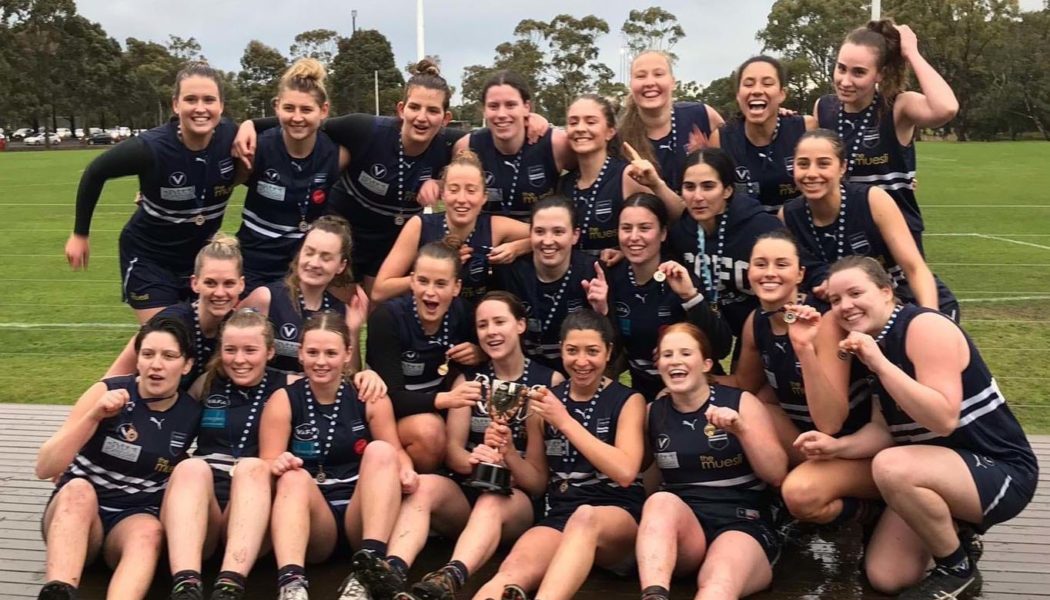 The CGFCW senior team are still riding the high after emerging as the 2019 premiers of Premier B after defeating Old Xaverians by 14 points in front of an impressive crowd of supporters last Sunday at Mentone Playing Fields.

Xavs were coming off a week’s rest, after defeating us in the semi-final two weeks earlier and progressing straight to the big dance, no doubt feeling confident that they could match it with us once again. However, our seniors were more motivated than ever. We came into the game having beaten Monash the week earlier on the same ground, in similar conditions. The build-up throughout the week leading up to the game was equally as exciting as it was overwhelming, but we were ready. We knew what we had to do.

The nerves were evident throughout the first term, with both sides eager to be the first on the score board. The ball found itself stuck in the midfield, super-star cross sport athlete Jessica Harley was phenomenal in the ruck from the first siren and went up time and time again with neither side able to get a clearance, let alone a solid forward entry until 15 minutes in the first quarter when following our first score of the day, a behind from Bridgette ‘Foxy’ Fox the incredible Irena Malliaris intercepts the kick out and delivers a perfect snap across her body and right down Kate Macqueen’s throat. Xavier give away a free kick in the marking contest and Macqueen slots the goal from 40 metres, pushing the margin to 7 points and setting the tone for the rest of the day. The Fields were in the driver’s seat, keeping Xav’s scoreless and a rushed Fields behind in the final minute stretched the quarter time scores to 1.2-8 to 0.0-0.

Despite the rain starting to come down in the second term, Marianna Anthony and Chelsea Fisher kept the foot on the accelerator and were unstoppable all over the ground with both taking their tackling and quick, effective decision making to a whole new level. Ella Baxter and Chloe Leighton played an integral role in clearing the footy from congestion in the wet weather conditions. It was a quiet day for our ever solid back line, but that didn’t stop Amy Dumas, Georgia Bryne and Angelique Doulgaris from having an absolute field day, exploding off the half back line with every Xavier attempt to bring it forward.

Resident half-back and one of the safest pairs of hand in the side, Montana White cemented what was to be the final score of the game with a stunning goal scored off a 50 metre penalty. Montana’s goal lit a fire up every single Field’s player and in that moment you could feel the anticipation seeping out of each and every one of us at the thought that we could, and we were, actually pulling this off.

Although the score remained unchanged in the final half, that certainly was no reflection of the excitement of the rest of the match. The rain poured, but Xavier fought until the very final siren – every ground ball, every contested mark. Premiership Captain, Toni Hamilton, kept cool calm and collected and was the leader that we all needed to ensure that we kept our intensity and that we were leaving absolutely everything out there for our mates. We knew that the work wasn’t over and that the tables could turn at any moment, with just one goal from Xavs. But in true Fields fashion, we were ruthless and you could see that we wanted it. Milly Hines and Joey Davey were everywhere, all over the footy and their opponents applying critical pressure through the mid field and our forward line all day which allowed the action to stay down at our end and kept us in control of the tempo.

The final quarter felt like it went for hours. The anticipation of the last siren and the first frothy. But after a 24 minute final term, we did it. We won the first Premiership in the 3 year history of CGFC Womens. It was incredible to witness every single Fields player keep composed and do their individual jobs.

There was not a single passenger in our Premiership win, everyone contributed and just as our now history making senior coach Mitch Dupljanin said in the weeks leading up to our finals campaign, “the team that does the simple stuff well, will win” and that was exactly what happened.

There is not a feeling or experience in the world that will replicate the moment when that final siren went. But there is something extra special about this win. The 26 girls named in that grand final side made history on the 18th of August 2019 as the first ever CGFCW Premiers. I can just see it now, the year is 2119 and our families, our daughters and granddaughters will attend a centenary celebration – 100 years since the first CGFC Womens Premiership. They’ll hopefully reminisce about the days before gender equality and be shocked that it was ever even a question as to whether a woman could or should play football.

A special mention must be made to all CGFCW players across our squad who contributed throughout the season to get us to the big dance. Whether that was by playing both the reserves and seniors, running water, being magneto or just being there behind the goals supporting. The depth of our team across the reserves and seniors has been one of the greatest contributors to our success. Watch out Premier Division — we’re coming!!!

You can read more about the CGFC 2019 Season here: https://www.cgfc.com.au/latest-news-articles