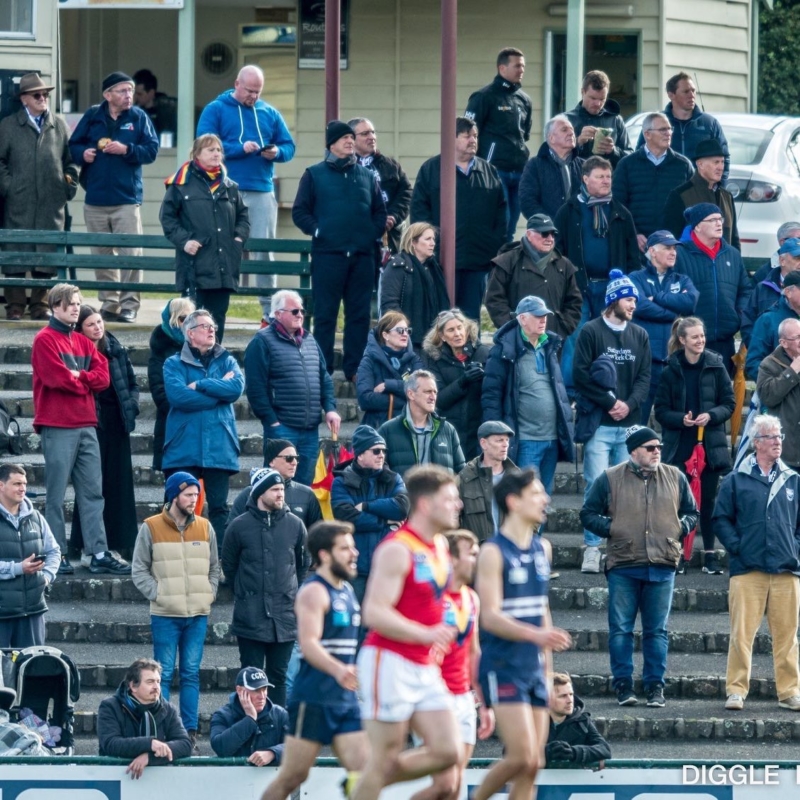 Expectations were high coming off a strong first season in the Premier Under 19 division and this year’s crop of players hit the ground running, eager to put in a solid pre-season. Numbers were consistently good, players committed to additional Saturday sessions, and 3 good wins in the practice matches had us raring to go.

Our first game of the regular season saw our hard work rewarded with a gritty 17 point win away at Parkdale. It was a promising whole team performance with the players exhibiting sheer determination and doggedness to get the team across the line. Harry Baxter, James McGivern and Charlie Ingham were exceptional in the midfield, with Jack Smart, Andy Blaher and Dean Salter playing pivotal roles.

Unfortunately significant injuries in the pre-season and the early weeks of the season took their toll on the team — James Marsden, Dan Sherman, Bailey Rankin, Ryan Matthews all out for extended periods and Dean Salter and Jackson Courtney ruled out for the year. The players, however were undeterred, fighting back after a couple of disappointing results to comfortably take out wins in rounds 4 and 5. The round 4 game against Beaumaris was a highlight, with Jesse Patrick and Lachie Stephens dominating, snagging 6 goals apiece and Tom Deighton 4 in the 114 point win. Stephens backed this up the next week against Carey with another 7 which saw him elevated to the seniors where his strong form continued, holding his spot for the remainder of the year.

Our round 9 match against Williamstown was one to remember — a 10 point deficit heading into the final quarter was overcome through a stirring team effort which saw us kick 4.3 to 1 goal in the final term. Andy Beer snagged 2 crucial goals late in the game, Charlie Ingham, James McGivern and Bailey Rankin gave us plenty of drive through the middle, Nick Lawrence and Ryan Matthews dominated down back and Angus Cameron playing on the wing was highly influential. Josh Patterson had a day out — his clean hands overhead and at stoppages a trade mark, as was his team first attitude which saw him excel at the 1 percenters the entire year. It was an exceptional team effort, typified by two courageous acts from Hayden Dickson running back with the flight and Ben Hall, as he did all year, throwing himself into every contest with an absolute disregard for his own well-being. A special mention to Sam Kirkham (father) who clearly tweaked his back retrieving the ball from behind the goals in the last quarter — impacting his ability to return it the Williamstown player in a timely fashion… fortunately it cleared up pretty quickly once the final siren rang.

The mid-point of the year saw many Under 19 players traveling overseas with Jesse Patrick, Seb Tabain and Mitchell Stephens leaving us for the year — Seb had been rock solid for us down back with his ability to out mark his opponent a highlight and Mitch’s marking and run off half-back were greatly missed. Jesse, a freak in front of goal, was missed for his exuberant trademark goal celebrations alone.

We also lost Harry Baxter to a significant concussion that prematurely ended his football career. Our hearts go out to Barra, everyone that knows him can see how much he loves his footy — he was the heart and soul of the team, consistently inspiring us with his sheer determination to win the ball and hunt down his opponents in a bone-crunching tackle.

Every cloud has its silver lining though, the loss of these players provided the opportunity for several current school players to join us during the holiday break. Liam Brannigan, Hudson Milnes, Tom Baxter and Mitch Kohne providing glimpses of the class and talent we will see next year.

Despite the forced changes in personnel, we showed that we would not go down without a fight — encapsulated by our round 11 match against ladder leaders De La Salle. It was an epic battle, with our boys holding the lead midway through the last quarter, but unfortunately with no players left on the bench for much of the game, De La Salle was able to run over the top. It was an incredible effort, and the players must be commended for the standard of football they produced and their sheer desire to win. This was exemplified by Angus Cameron who was forced into the ruck, he threw all he had into it, dominating the hit outs and driving us forward. Of course the highlight of the game had to be Jack Smarts running goal, and the ensuing celebration, early in the last quarter after a damaging and creative Hudson Milnes switch.

The run home in the second half of the season saw only two more victories — but they were memorable ones.

The round 13 Under 19 game against St. Kevins game was an absolute thriller, with scores level with minutes left on the clock. Enter Andy Blaher and one of the best rushed behinds I’ve ever seen to give us the lead — he would have stepped over his own mother to get that ball over the line. The icing on the cake was Max Milnes sensational pack mark from the ensuing kick-out and launching one from 50 metres out as the siren rang to give us the 7 point win. James McGivern and Noah Cunningham dominated in the middle whilst Hamish McIntyre and Dan Sherman were superb in defence.

We started slowly in our round 14 game against Carey with their midfield clearly on top. It took a shut-down role from James McGivern and the hard running and contested ball work from Darcy Rouget, Andy Beer and Charles Lilly on the wings to stifle Carey’s run. Lawrence was shifted to the forward line to great success kicking 5, and was ably supported by Tom Deighton with 3. Nick Van Der Linden was everywhere, Clay Alexander was a force to be reckoned with in the ruck and Jack Smart was again in the best. Fields by 20 points.

Late in the year we again welcomed the school boys into the fold with Alex Hardie and Harry Neave both impressing with speed, skill and passion. Ollie Lowe, son of past player Darren and brother of current player Alex, marked everything that came near him, he may yet be the best Lowe we have play for Caulfield.

Although by the end of the year, with 6 wins to our name, the win-loss ratio was not where we would have liked it to have been there were still plenty of positives displayed by the playing group:

You can read more about the CGFC 2019 Season here: https://www.cgfc.com.au/latest-news-articles